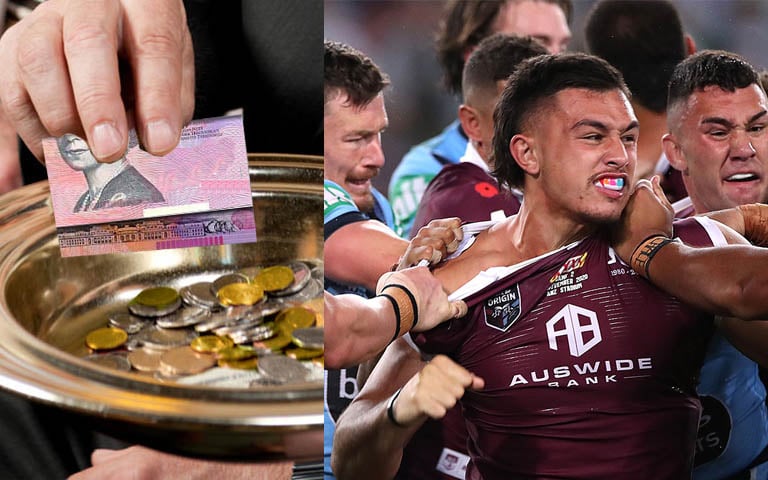 In case you didn’t already know, the biff is back.

It comes after the NRL changed its rules regarding the penalty for on-field aggression in representative matches.

For the first time since the 2013 ban, players can engage in aggressive behavior again, as they will be punished with individual fines, as opposed to game suspensions that extend into the regular season.

Referee for tonight’s State of Origin opener, Ashley Klein now has the power to foul players if they throw punches or engage in any other act of foul play throughout the match.

So, with players now allowed to throw them away without fear of pissing off their club coaches, there is a strong likelihood that some of the hottest footballers will be willing to risk ten minutes in the trash and the financial repercussions they will. are too young to be fully understood.

It is for this reason that tonight’s opener at Sydney’s Olympic Stadium will be the first time a football crowd has passed around a collection plate.

Rugby League fans have organized themselves to fund a support package to help defray the costs incurred by Origin players who decide to let a few closed fists fly.

ARL President Saint Peter V’Landys said that while he does not necessarily endorse initiatives that encourage violence on the ground, he says this is the kind of grassroots commitment that Australian sports administrators can only dream.

“I mean, I hope the players don’t screw up,” V’Landys told the Betoota Advocate today.

“I guess you have to ask yourself. Can today’s children carry on as before? We never gave them the chance”

“Sometimes I feel like going to general admission at Randwick Race Track and tossing a few schooners into the crowd. I want to see what these young guys have. I want to see the bastard”

“…I also want to know if I still have it, just quietly”

Mr. V’Landys paused, realizing he was now verbalizing his own fantasy of going for one last shot.

Like, 2020, what would have happened between Payne Haas and Big Country Fa’asuamaleaui if they were allowed to let them fly”

“I guess tonight… We’ll find out”