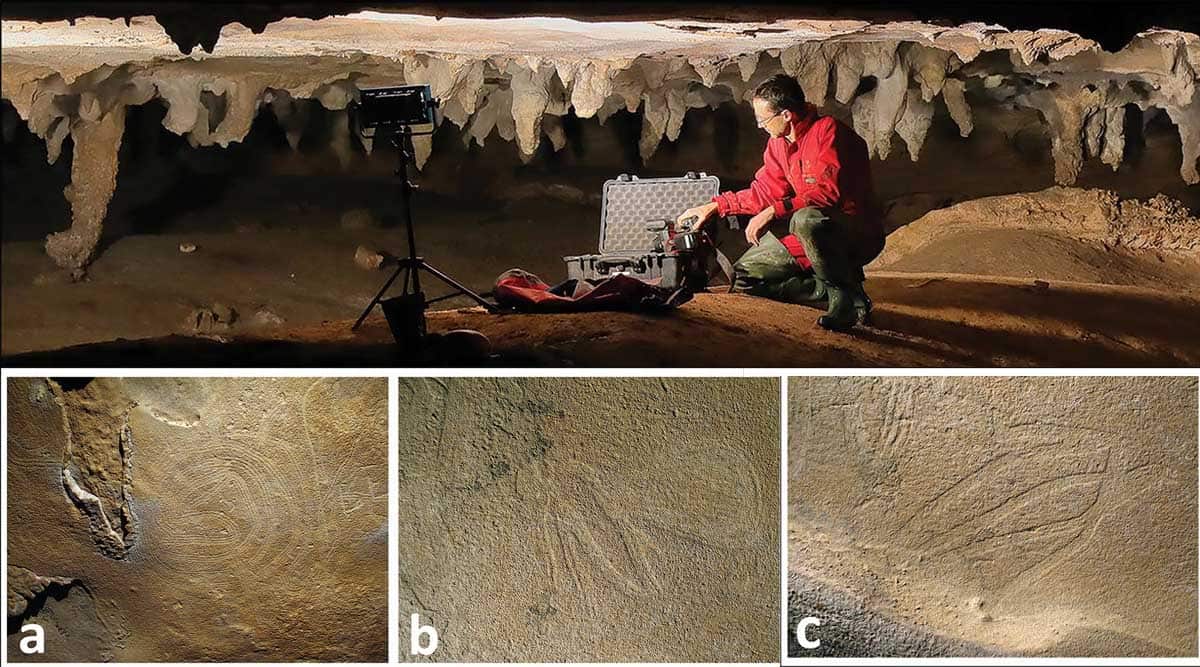 The researchers used 3D scanning technologies to reveal what they say is the largest collection of ancient Native American rock art discovered in North America. The drawings were discovered in the “19th unnamed cave” in Alabama in the United States. Its location remains secret and it was arbitrarily named for the same reason: to protect it from vandalism and other forms of destruction, as it is too valuable an artifact.

“They probably represent figures from previously unknown religious stories, probably from the Middle Woodland period. The most striking aspects of these rock art images are their size and context. Among the mud glyphs of the unnamed 19th cave are the largest known rock art images in North America. They are so large that the creators had to create the images without being able to see them in their entirety. Thus, the makers worked from their imaginations, rather than from an unfettered visual point of view,” the researchers wrote in the paper.

The 19th unnamed cave comprises over 5 kilometers of underground passages with an entrance 219 meters above mean sea level. This entrance is approximately 10 meters high and 15 meters wide. An intermittent stream flows from the cave, due to which no intact archaeological material has survived at the cave entrance.

From the “main hall” of the cave, a passage rises to a 25 x 20 meter chamber bounded by lava formations. Mud glyphs are inscribed on the ceiling of this “hall” which is only 125 centimeters above the ground at its highest.

In late 2017, Stephen Alvarez of the Ancient Art Archive capitalized on advances in 3D photogrammetry to create a high-resolution, three-dimensional topographic record of the glyphs drawn in the chamber. Photogrammetry is a software-based 3D modeling technique that uses photographs.

You start by taking many photos of the target object or location, with each photo overlapping the next by about 60-80%. The photogrammetry software then compares the images and overlaps and calculates the camera positions used to produce the images. The software then triangulates the pixels in 3D space to create a “point cloud”.

This cloud is rendered in a very precise mesh of the modeled surface and the mesh is textured with the texture of the original images to make it look like a photorealistic 3D model. The model resulting from this technique is then calibrated by measuring the known distance. For the unnamed 19th cave, the researchers created three linked models: one of the cave’s undecorated passages and two of the carved ceiling.

The first overhead model was photographed using a Canon 5D Mark IV DSLR, which has a 30.4 megapixel sensor, and a Canon L-series 24-70mm f2.8 lens set to 24mm. For the first model, the researchers used tilted lighting that made some glyphs more obvious while obscuring others. But that wasn’t a problem as the first model was created to provide a “roadmap” for the higher resolution second model.

For the second model, the researchers used a flat light and a Canon 5DS DSLR camera with a 50 megapixel sensor and a Sigma 24mm Art Series lens. These photographs were taken with an 80% overlap and were used to create a very high resolution model of the cave ceiling. The third model was of the entire space of the cave from the entrance to the section with the drawings. This was a lower resolution model taken with the first model’s camera and far fewer photographs.